Gaia Water Ltd. was recently presented with Best Company for the category of “Filtration System” at Canada’s largest cannabis business conference and expo, GROW UP conference.  Gaia’s patented nanobubble technology enhances plant growth and health by utilization of oxygen and or carbon dioxide. For more information, contact a Gaia associate. 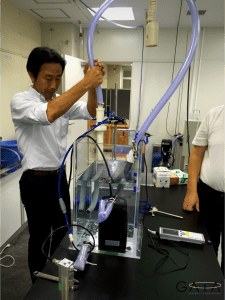 In August of 2016, Gaia was invited to visit IDEC to have the efficacy of Gaia’s patent pending technology analyzed in production of ultrafine nanobubbles. The testing was conducted at the University of Osaka, Photonics Department laboratory under the supervision of IDEC scientists. A Malvern Particle Analyzer, the NanoSight NS500V-HS, was used to determine composition of bubbles produced and dissolved gas measurements. These tests were performed with oxygen and carbon dioxide gases. The experiments performed showed that Gaia technology produced bubbles in the range of 100 nanometers (0.1 microns) in size with volume concentrations dependent on the gas injected.

Recognizing the complimentary nature of Gaia’s technology to that offered by IDEC, the companies executed a Cooperative Business Relationship Agreement in December, 2016.  The Agreement, which continues today, solidified the companies’ working relationship in expanding the ultrafine nanobubble markets in the US and internationally.